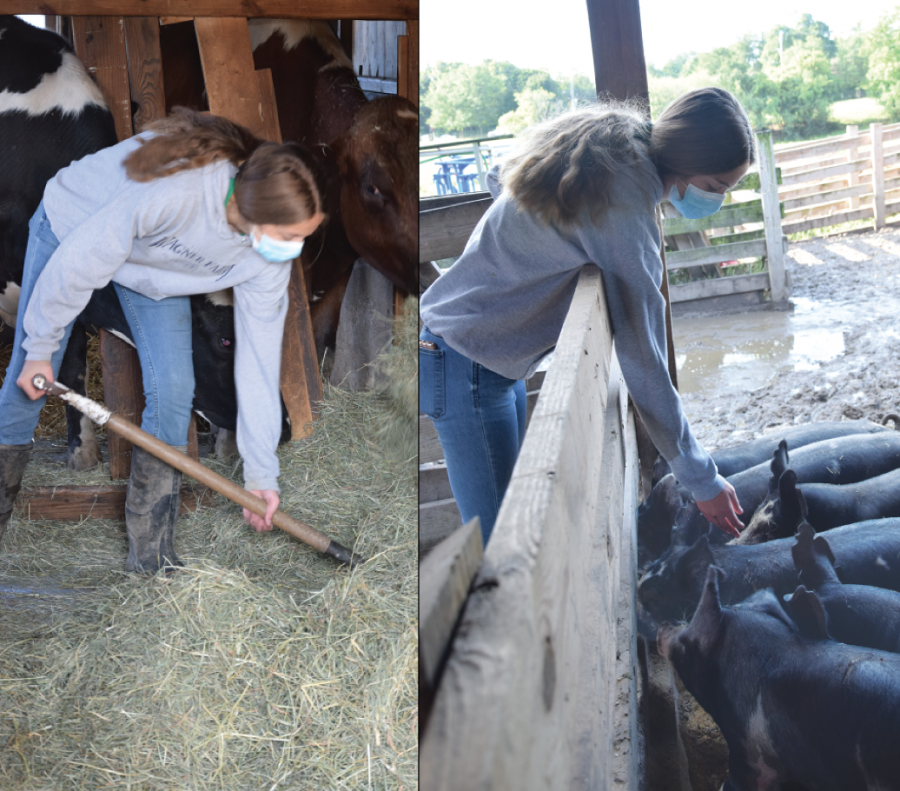 Junior Holly Gilchrist shovels hay and cares for pigs at Historic Wagner Farm in Glenview on Sept. 13, 2020. Gilchrist helped raise her pigs, which she then auctioned off at an annual fair. Photos by Natalie Sandlow

Feeding pigs marshmallows, doughnuts and ice cream is a usual undertaking for junior Holly Gilchrist. When the young pigs first arrive at the farm they are skittish and nervous, so she brings them all types of foods to help them to settle in and get to know her.

Gilchrist first joined Glenview Clovers 4-H, a program dedicated to raising and selling farm animals, at nine years old. Through 4-H, she has had the opportunity to raise seven pigs of her own, as well as work with a variety of other farm animals. After raising a pig, Gilchrist demonstrates the work she has done with her pig at a fair and sells it there.

Holly’s mom, Bridgette Gilchrist, said in a phone interview that she thought her kids might like working with farm animals, so when she discovered the Glenview Clovers 4-H program at Historic Wagner Farm in Glenview, she signed them up.

Holly said in a video conference that she chooses her pigs from a breeder in Wisconsin each spring. She looks for certain characteristics when choosing a pig, such as length and squareness.

In order for the pigs to gain muscle, Holly said she walks them, which makes them look more athletic and increases their selling value. She leads the pigs with a long stick which helps in preparation for the showmanship category at the fair.

Holly usually walks a pig for 20 minutes at a time, but when she first gets a pig she will ease them into walking.

“I’ll just let [the pigs] sniff around and walk them for five minutes, give them a break and then walk them for another five minutes,” said Holly.“It’s important that when you walk them they don’t associate it with something bad because you’re going to be walking them almost every day, so you want them to enjoy it.”

Holly once had a pig named Peaches who hated walking, but she was ultimately able to bribe Peaches with a bath.

“[Peaches] would just scream every time she went out of her pen,” said Holly. “Not in pain but like, ‘I don’t want to do this,’ so, at the end of every walk I would give her a bath and she loved the baths. So, she would want a walk and want to get out [of the pen] so at the end she could get a bath.”

At the end of July, the town of Grayslake hosts the annual Lake County Fair, where 4-H members show off their animals. There is a showmanship award, which Holly has won, that offers sellers the opportunity to demonstrate the training they have done with their pig.

The fair concludes with an auction, and the next day the animals are loaded onto trailers and taken away.

Holly said throughout the years it has become easier to give up her pigs as she has come to realize they are going to feed people. This year Holly’s pig was donated to the Northfield Township Food Pantry.

Holly also feels better giving up her pigs as she knows that they may not have had the opportunity to go out on walks and eat human food if they were on a regular farm, she said.

“These animals are literally getting the best life possible,” said Gilchrist. “There is someone that [spends] specific time and gets to know each and every one of the animals.”