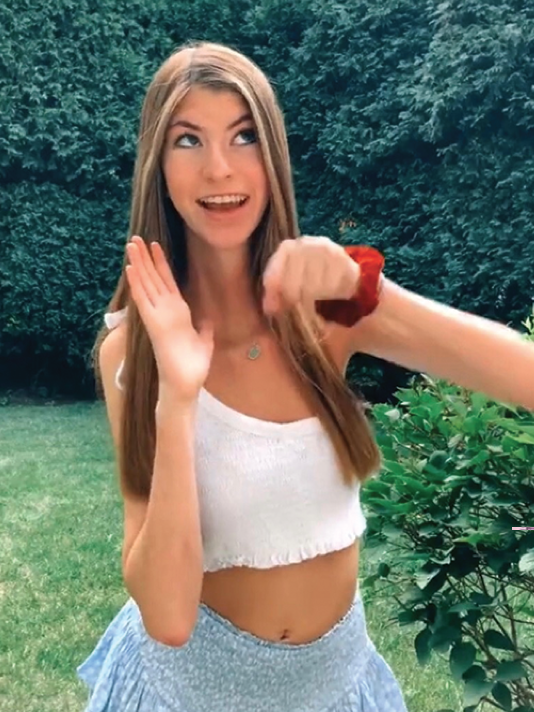 Senior Chloe Pasman dances for a TikTok in her backyard. Pasman has used TikTok to share her experience with SEPN1 muscular dystrophy. Photo by Alexa Stolyarov

Wrapping her fingers around her wrist so they touch, folding her sweater sleeve around her upper arm and showing the size of her leggings were all actions senior Chloe Pasman included in one of the first TikTok videos she posted on her account about the impact the disease, SEPN1 muscular dystrophy, has on her body. This video garnered over 47,000 views. Today, Pasman’s TikTok account has over 40,000 followers.

Chloe’s father, Alex Pasman, said in a video conference that Chloe was diagnosed with SEPN1 muscular dystrophy when she was 12 years old.The disease is congenital, meaning she was born with it. It is also genetic and caused by anomalies in the SEPN1 gene.

After she uploaded the TikTok video about the impact the disease has on her weight, Chloe started to post more content.

“When I first started TikTok I did not know, like, how many people were on it,” said Chloe in a video conference. “I also just did not think people would be that judgy.”

She was not sure how to deal with the negative comments about her body in the beginning, said Chloe. Now when she sees them, she tries to educate the commenters.

“[I] just say, ‘Hey, that’s not really nice, I was actually born with a type of muscular dystrophy and you should keep that stuff inside and not say it online,’” Chloe said.

At one point, Chloe said she considered turning the comments section of her videos off due to negative comments.

“I never ended up doing so because then it turned out that there were a lot more people in my comments who were being really nice,” Chloe said.

While looking at the comments on one of her TikTok videos, Chloe said she noticed a comment from a teenager asking if they had the same disease, which they did. From there, they were able to further connect and relate on their experiences with the disease.

Rachel Alvarez, executive director of Cure CMD, a nonprofit organization whose mission is to find treatments and a cure for congenital muscular dystrophies, said in a video conference that social media can be a double-edged sword when spreading awareness. While it can lead to misinformation, it can also enable people to come together and learn from each other.

“I think … that young people are starting to understand that we all have something different about ourselves,[SEPN1 muscular dystrophy] just so happens to be what is different about Chloe,” Alvarez said.

According to Chloe, she tries to pass on the message about body confidence to her followers through her videos and tells them not to look at their body and think the worst of it.

“I don’t fully love myself yet, I’m … getting there,” said Pasman.“Whenever I look in the mirror, I still do get insecure.

“You just kinda have to surround yourself with people who can support you and guide you through finding your confidence.”