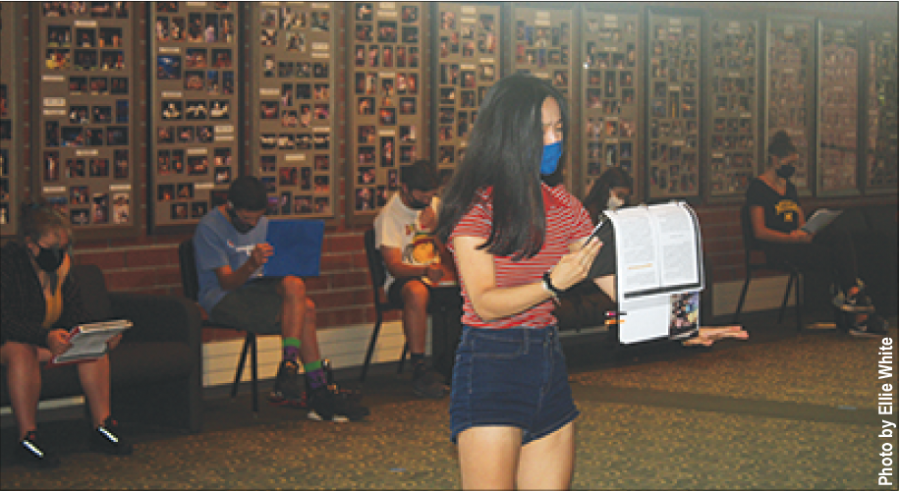 Junior Claire Chang reads her lines during a rehearsal in the CPA lobby. “The Laramie Project” is scheduled to be broadcast at 7 p.m. on Oct. 22, Oct. 23 and Oct. 24. Photo by Ellie White

When senior Charlie Chemers’ football season was moved from the fall to the spring due to COVID-19, he had the opportunity to pursue one of his other loves at Glenbrook North: theater.

“I was able to audition this year for the fall play and ‘One Acts,’ and … I was really just hoping to make one of them, and it happened to be ‘The Laramie Project,’ so I was really excited,” Chemers said in a phone interview.

The upcoming fall play, “The Laramie Project,” is a documentary-style theater production about the 1998 murder of Matthew Shepard in Laramie, Wyo. Shepard, a college student, was targeted due to his sexual orientation.

During rehearsals, the cast was required to stay six feet apart from one another in order to maintain social distancing. The cast also had to wear face masks at all times, except during water breaks.

“We are consistently practicing saying our lines [while] wearing our masks in order to not mumble and to be heard clearly,” Chemers said.

According to Theater Director Tim Broeker in a video conference, “The Laramie Project” is scheduled to broadcast three prerecorded online performances at 7 p.m. on Oct. 22, Oct. 23 and Oct. 24.

“You’ll have to go to [ShowTix4U] and purchase your ticket through the website,” said Broeker. “Through that ticket, they share that link with you to log on … and watch the show. It’s different, but we wanted to try to keep it as normal as possible.”

Tickets for the play are set at $10 for individual tickets, $35 for a family pass and are free for students with activity passes, Broeker said in an email correspondence.

The production is partnering with GBN-TV Production Crew to film “The Laramie Project.”

According to Chemers, GBN–TV Production Crew  is planning to record the production with different angles and shots to create something similar to a movie.

“It is going to make it, I think, a more personal experience for the audience,” Chemers said.

Freshman Andrew Burke, who auditioned for “The Laramie Project” in his bedroom over Zoom, said in a phone interview that an upside to auditioning online was being a lot less stressed because he was in his personal space.

Broeker, who is a first-year teacher at GBN, said trying to learn the ropes of GBN Theater on top of navigating what theater looks like in a COVID-19 world has been challenging.

“But I also think on the flip side, it’s kind of like we’re all new to this and we are all figuring this out together,” said Broeker. “So it’s not like I’m coming in totally blind and everyone else knows what’s going on.”

According to Chemers, it is interesting to see how social distancing measures have impacted the relationships between the cast.

“It’s a little bit more difficult to have the camaraderie of the cast that you normally would build by creating those connections up close with one another.

“You can definitely see that everyone is putting in the effort to create the environment that we want while being safe,” Chemers said.