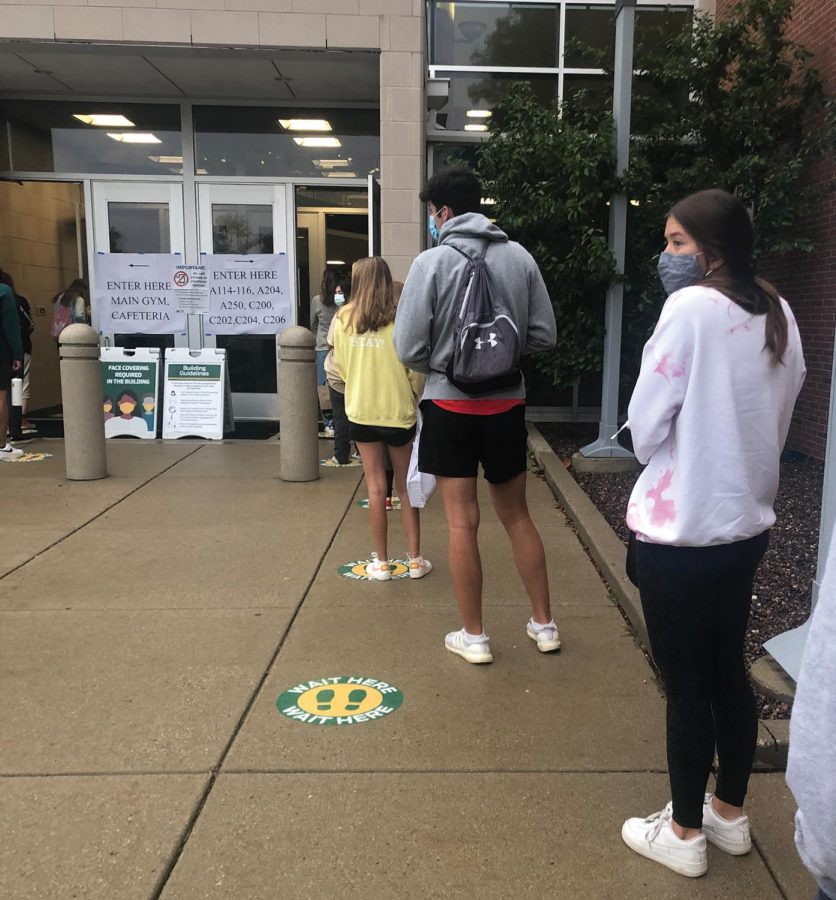 Students line up to take the ACT at Glenbrook North on Sept. 12. In response to the COVID-19 pandemic, GBN held an additional school day ACT on Tuesday Oct. 6. The Oct. 6 ACT was only available for the Class of ‘21. Photo by Rachel Katz.

In the middle of a road trip senior Eliza Clemons waited on the ACT website at noon, trying to make sure that she would get a spot for the Sept.12 ACT at Glenbrook North.

Frustrated and stressed, Clemons was unsure if the website had given all of the ACT spots to other students, and in the 35 minutes it took her to register, it was not clear whether she would get the spot she wanted.

GBN Testing Coordinator Katie McKeown said in a video conference that the limited number of ACT spots is due to decreased capacity in each ACT testing location due to COVID-19. Now, following local and national guidelines, only 48 test takers are allowed per testing space, down from 75 to 80 in previous years.

In response to decreased ACT testing capacity, GBN added additional test dates to ensure that more seniors are able to take the test. This year, Glenbrook High School District #225 is hosting four test dates, while two to three have been held in previous years, McKeown said.

District #225 worked with the ACT to provide an optional district-administered ACT exclusively for GBN seniors. This allows seniors to take an ACT during the school day before their college application deadlines. This ACT was scheduled for Oct. 6.

The availability for the added district administration of the ACT was originally going to be on a lottery basis, but every senior who signed up for the test was given a spot for Oct. 6.

Both Clemons and McKeown have had trouble getting in contact with the ACT. McKeown said she has waited up to three hours on the phone when trying to get in touch.

According to Clemons, she received an email in June 2020 from GBN stating her scheduled ACT test date was canceled.

“It was definitely nice to hear from GBN about [the test cancellation], and I do think it was good that they reached out to us … and the communication [has been] really good,” Clemons said.