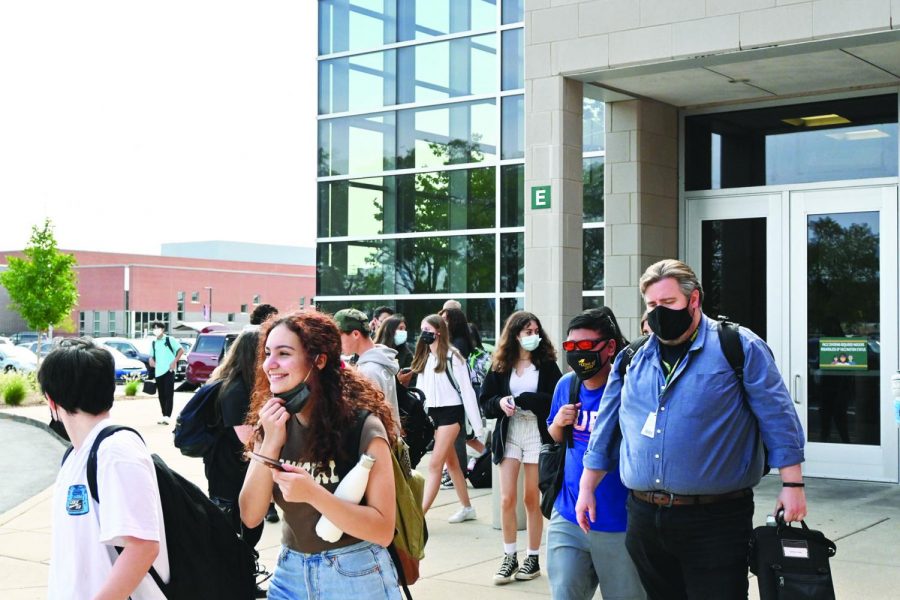 Junior Elani Torres takes off her mask while leaving the building after school. Students are encouraged but not required to maintain a proper social distance of three feet when unmasked and outside. Photo by Saruul-Erdene Jagdagdorj

As a freshman, junior Orly Zuckerman typically ate lunch with friends in the choir hallway. This year, she eats lunch in the cafeteria or student mall, the two designated lunch areas, because she considers it less of a risk.

According to principal Jason Markey, anyone who is indoors on campus should be masked unless they are actively eating or drinking. The cafeteria and student mall, weather permitting, are the only areas in which students should eat lunch.

According to the Student/Parent Handbook, students should not consume food or beverages in classrooms, resource centers or hallway areas.

“When you’re taking a drink, take your mask off, but then put it back up until you take your next drink,” Markey said.

According to Zuckerman, she keeps her mask on for the majority of the school day.

“I’ve just assumed I should wear my mask everywhere and eat probably only in the lunch areas,” Zuckerman said.

According to Markey, students are not required to wear masks once they are outside. Social distancing of three feet is encouraged but not mandatory outside.

If a student wants to eat or drink in class, the teacher’s discretion and comfort level determines if the student should step into the hallway, Markey said.

According to English teacher Kate Kinsella, she does not allow her students to eat during class.

“As far as the sip of water here and there, I’m fine with that as long as the mask goes right back on afterwards,” Kinsella said.

According to Markey, a student who repeatedly does not follow the indoor masking practice will be sent to the Deans’ Office.

“Do we see [masks] slip below the nose and we’re reminding people [to pull them up]?” said Markey. “Yes. I think the concern more is [the] consistency of wearing it appropriately, not just having it on.”

According to Kinsella, she notices the biggest problem with students disrespecting the masking practice when she walks around the building.

“Students [are] eating in areas they shouldn’t be eating or walking through crowded hallways with the masks down,” said Kinsella. “Those are the moments that get me very anxious.”

According to Zuckerman, she often sees students at school wearing masks incorrectly.

“I think about [correcting students] a lot, but it’s scary.

“They’re just going to think I’m ridiculous and funny, and they’re not going to take me seriously,” said Zuckerman. “I wish that I could be taken seriously.”