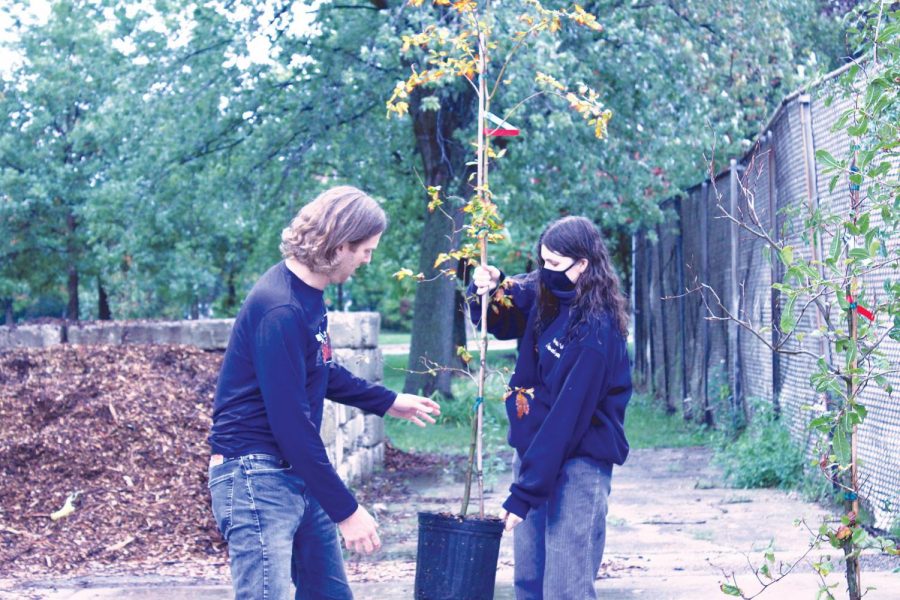 As part of "Oak-tober," an effort of the Climate Action Plan, Tessa Murray, the Village of Northbrook's sustainability coordinator, passes out trees. This initiative is part of the plan's efforts to increase tree coverage in Northbrook. Photo by Alicia Amsel

One of the Village of Northbrook’s goals in the fight against climate change is a 35 percent reduction in greenhouse gas emissions by 2030. The Northbrook Climate Action Planning Team, composed of Village staff and community members, spent six months developing the Climate Action Plan, which outlines specific actions to achieve this goal.

Tessa Murray, sustainability coordinator for the Village of Northbrook, said in a video conference that the Village’s Board of Trustees has picked 10 actions from the plan to prioritize, including converting all streetlights to LED lighting by 2030 and phasing out single-use products such as utensils, takeout containers, and plastic and paper bags by 2026.

“We’re starting with a 10-year plan, but we’re hoping by 2050 our carbon emissions are at least 80 percent lower than they are today, if not more,” Murray said.

The plan states that on the current trajectory, within 30 years, Northbrook is expected to suffer from at least 20 more days each year of temperatures over 95 degrees.

Village Trustee Robert Israel said in a video conference that the plan has almost 200 specific actions to combat climate change, some of which are as simple as making recycling available to more people or educating people on idling their cars.

“Don’t idle your cars while you’re waiting to pick up a student because that simply creates greenhouse gases to no effect,” Israel said.

According to Murray, she encourages people to be more conscious and take small steps against climate change like walking instead of driving.

According to Israel, response to the plan has been overwhelmingly positive, evident in the approximately 735 responses left by community members on the plan’s published document.

Kimberly Ptak, director of operations for Glenbrook High School District #225, said in a phone interview that the Operations Team plans to provide a report on a list of initiatives from the Village’s plan that either have already been implemented or can be implemented within the district. The district is in the process of converting to LED lighting.

Senior Nell Badgley helped develop the plan as a member of the Climate Action Planning Team.

“I think that if we really stick to [the plan] and we really make fighting climate change a … solid goal, that it will make change,” Badgley said.

People can be a part of discussions on local climate action initiatives through the Sustainability Commission which is currently looking for high school representatives.

According to Badgley, people should get involved with local climate action.

“It’s so easy to make change that you want, especially at a local level,” Badgley said.