Changes scheduled to finish by August 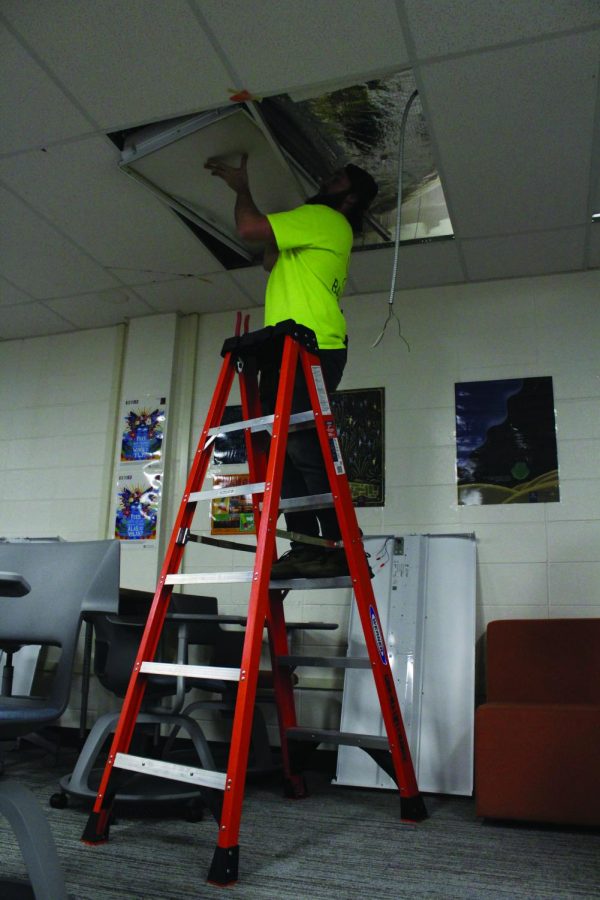 As a part of the “Total Classroom” initiative, maintenance employee Wesley Garbutt replaces an old light with a new LED light. All newly installed lights are planned to have a dimming feature to adjust lighting. Photo by Jiya Sheth.

With a cost of about $4 million, the aim of the “Total Classroom” initiative is to modernize classrooms throughout Glenbrook High School District #225.

“The whole idea through this journey has been, ‘How can we look to modernize our classrooms with furniture, technology and other resources to meet the needs of today’s students?’” associate superintendent R.J. Gravel said.

Core academic learning spaces, with the exception of science classrooms and previously renovated classrooms, are scheduled to be renovated this summer with new carpeting, newly painted walls and accent walls, LED lights with dimmers and new whiteboards.

“This will be funded through unanticipated property tax revenue that we’re receiving as a result of the Glen Naval Air Station, [which] is what we call a [tax increment financing] district in Glenview,” said Gravel. “It’s ending a year earlier, which we didn’t expect, so we received additional revenue, so that’ll be covering this expense.”

Science classrooms are scheduled to be renovated prior to the start of the 2023-2024 school year and are not included in the original approximately $4 million budget, Gravel said.

“Science labs, candidly, they’re complicated because you have the lab and classroom portion, so they’re going through an experiment right now that kids will experience in the fall for a few classrooms at both schools, and then we’ll finish it up the next summer,” Gravel said.

Materials for students in renovated classrooms include a standardized style of rolling chairs in various colors. Depending on the department, mobile tables and desks are part of the plan to allow for flexible groupings.

Senior Lauren Stinchcomb thinks having chairs and tables with wheels is very helpful, she said.

“We did a simulation where we had to make prison cells [in class], so we moved the tables into rows and stuff like that,” said Stinchcomb. “It was cool because you’re able to make completely different things out of learning spaces.”

“The reality is the way we teach and the way our students interact with each other and learn has changed,” said Gravel. “This is not something that changed between 2021 and 2022.”

According to Lauren Bonner, associate principal for administrative services, renovations “will be fast and furious all summer long.”

“The goal is to be done right in that first week of August so that the furniture can be … installed the first and second week of August,” Bonner said.

According to Gravel, starting in the spring of 2017, pilot rooms in different subject areas at both schools received demo furniture, and information gathered from students, staff and the board informed their decision to renovate classrooms.

“I hope that this project will allow students to feel more comfortable in our classrooms,” said Gravel. “I hope that it will provide an opportunity for teachers to continue to modernize and enhance their instructional practice.”