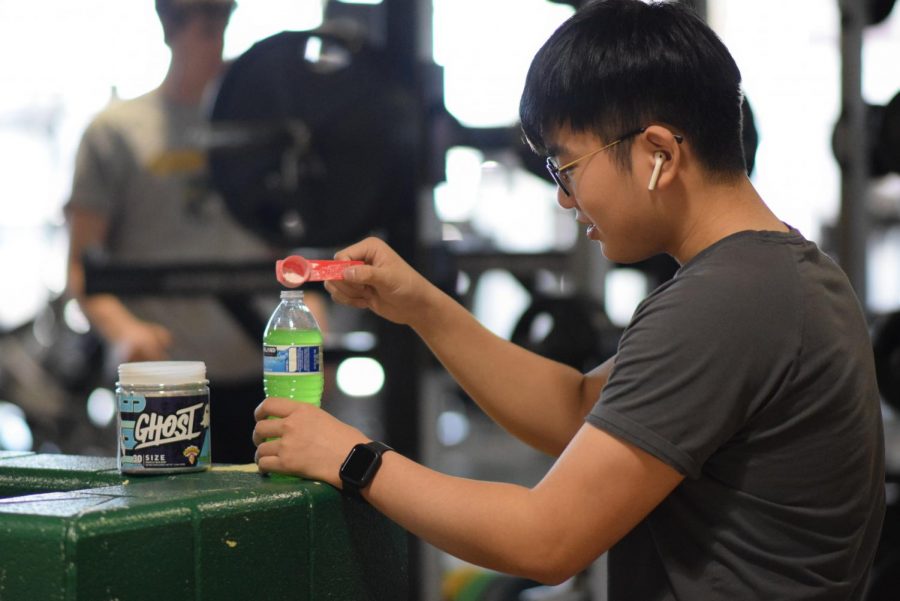 Junior Frank Min dumps muscle-building powder into his water during a workout after school. The pictured powder does not contain added caffeine, unlike other supplements. Photo by Natalie Sandlow

On the second day of the boys gymnastics State Final Meet in 2019, junior Daniel Lavrentiev did something he does not do very often. He was drained after the first day of competition, so he took a pre-workout powder containing caffeine. After his warm-ups, when the pre-workout kicked in, Lavrentiev felt relieved. He competed that day with increased energy, but at the end of the competition, he crashed.

Lavrentiev said he would not recommend taking supplements containing caffeine because they are not natural sources of energy. He said nothing could beat a solid amount of sleep.

Bob Girandola, professor of biological science at the University of Southern California, said in a phone interview that caffeine is beneficial for long-term exercise because it increases the amount of free fatty acids in the blood, and fats are the main source of energy for long-term exercise. Caffeine is a main ingredient in many pre-workout supplements.

“If two people are exercising on a treadmill at the same speed, and one person was taking caffeine [while] the other person was taking nothing at all, the person taking the caffeine would feel like they’re doing less work,” said Girandola. “[Caffeine reduces] the feedback you get from your muscles and joints … going back to the brain, … so you don’t feel as tired.”

Matt Purdy, head varsity football coach, said the coaching staff and the athletic trainers talk to the football players at the beginning of the season about ways to maintain their health, including avoiding taking “pre-game supplements.”

“Football seems to be a prevalent place where people try to find different avenues, so we try to really discourage them from doing anything outside of just good diet and hydration,” he said.

Both the Student-Parent Handbook and the IHSA list caffeine as a banned substance if the concentration in the urine exceeds 15 micrograms per milliliter, which, according to Girandola, is equivalent to drinking about six cups of coffee in two hours. However, two people can drink the same amount of caffeine and have different amounts of caffeine in their urine.

The IHSA discontinued its performance-enhancing drug testing program after the 2016-2017 school year. Glenbrook North does not conduct random urine testing.

Purdy said athletes should learn more about the implications of supplements containing caffeine before taking them.

“I wish our students would spend more time seeking out advice before they try to find the quick, easy fix,” said Purdy. “Because it just doesn’t pay off.”