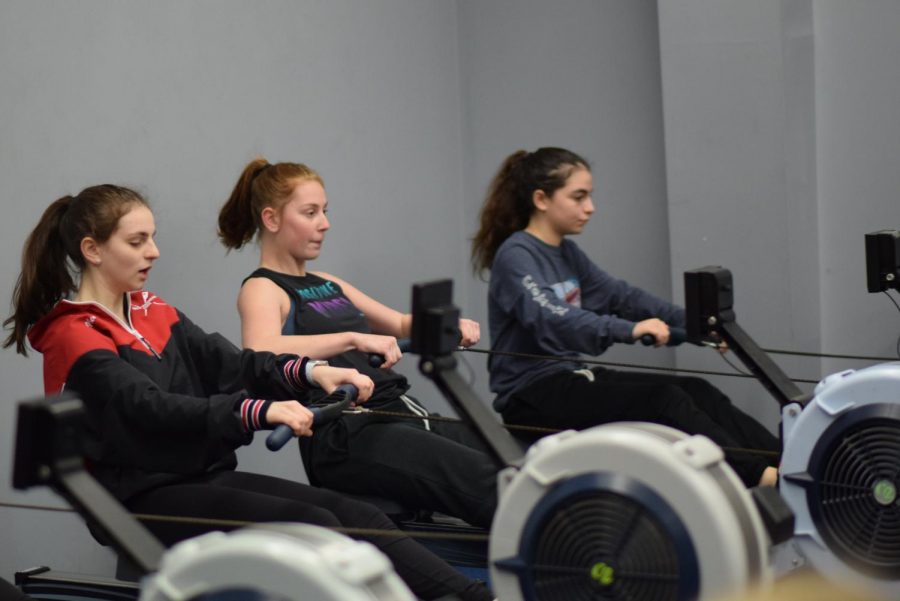 On a chilly March morning at 5:20 a.m., sophomore Abby Schyman rowed in sync with 22 teammates on a rowing machine inside the Dammrich Rowing Center in Skokie. As “All Of The Lights” by Kanye West blasted through the compact indoor facility, Schyman and her teammates smiled through warmups.

Schyman first heard about rowing, also known as crew, the summer before her freshman year from her mom, who had seen rowing machines at Orangetheory Fitness. Schyman’s mom told her to try using the rowing machines there.

“At first I was like, ‘I hate this,’ … and then once I went to the first practice, [rowing became] my favorite sport,” Schyman said.

Schyman is a member of the North Suburban Crew, a club team that has no affiliation with any school. Members of the team include students from Glenbrook North and Glenbrook South, along with from surrounding schools.

During the fall and spring seasons, the crew team practices outside on water at the Skokie Lagoons. During the winter season, and when the weather does not allow the team to be outside, the team practices on rowing machines at their indoor facility. The winter is a conditioning season in which the team works on its form and endurance.

When the winter season ends, the team takes one to two weeks to adjust to balancing the boat correctly and to get used to being on a real boat, Schyman said.

“The boats have lights and then our coxswain, [the rower responsible for steering the boat], they also have lights on their head,” Nemerson said about outdoor practices.

The team competes in regattas, which are races on water, Nemerson said. They use boats with either four or eight girls each, depending on the race.

According to Schyman, Regattas are mainly held in nearby states. Schyman said this is due to the lack of water fit for competitions in Illinois. Typically, the team has three to five regattas per season.

The team has a tradition of bringing hammocks to regattas and hanging out on them between races, Schyman said. At one regatta there was a park and the team hung up hammocks on the swing sets and slides.

“Last year, [the team environment] was a lot more lenient and … comfortable and easy, and this year, the coaches and us, … we have all agreed that we really want to push ourselves,” Schyman said.