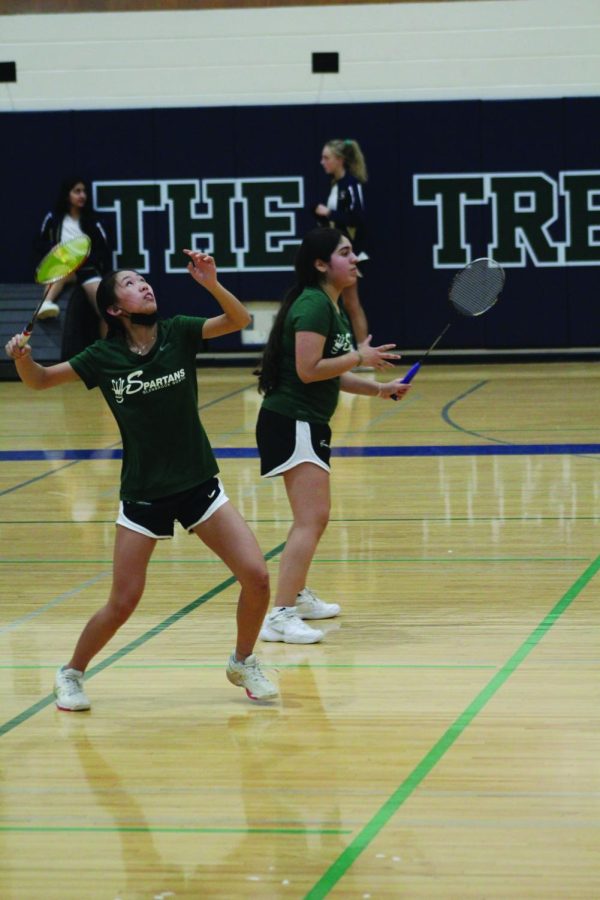 Winding up for a smash, freshman Katelyn Wu (left) and her doubles partner Nicole Konstant play at the conference tournament on April 30. The team placed second at the sectional competition with a score of 13.5 on May 5. Photo by Jiya Sheth

Spread throughout the fieldhouse, rows of badminton players simultaneously competed in doubles and singles matches in a meet against Warren Township. Hiding their hand motions from the other team, players communicated to their partners before serving, telling them where they intend to place their serve.

“Playing badminton is the first time I’ve experienced being a part of a team,” said senior Nisha Vazzalwar. “We all help each other with the placement of our shots and our strategies before or during any matches.”

According to head coach Tiffany Kim, the team consists of five upperclassmen and eight underclassmen.

The young age of the team made it important to introduce team camaraderie early on in the season to give the players more confidence to be on a varsity team, Kim said.

“Going into the beginning of the season, a lot of the girls were nervous and scared to play at the varsity level,” said Kim. “Now they’re a little bit more confident and are comfortable, but it really helps that they are so talented and skilled.”

According to Vazzalwar, playing with skilled underclassmen brings a new sense of excitement and urgency to playing.

“All of [the underclassmen] are full of energy at all the practices and games,” said Vazzalwar. “It’s nice knowing that when the seniors graduate, there is still going to be a strong team.”

Over the summer, sophomore Sydney Stachovic began playing backyard badminton with her family and soon joined a club to compete competitively, Stachovic said.

“I started playing more and really began to love it, so I went and joined a competitive club in Vernon Hills,” Stachovic said.

Being on varsity for the first time this year as a sophomore, there is no favoritism towards the returning upperclassmen players, and the team has no divide from the differences in age, Stachovic said.

“It was an easy transition from the freshman team last year because the [varsity] team has a lot of diversity with our ages,” Stachovic said.

The team finished the season with a conference record of 11-1 and on April 30, the team won the CSL conference. Two doubles and two singles teams qualified for the state competition, which was scheduled for May 12 to May 14. Doubles partners Stachovic and Vazzalwar have a record of 23-4 in their matches this season.

Over a weekend without any practices, the players all went to Stachovic’s house for team bonding, Stachovic said.

“We actually started playing ping pong,” said Stachovic. “It was the closest thing to badminton that we could find and ended up being really fun.”

According to Vazzalwar, focusing more on the team’s connection rather than individual success has helped the team grow closer and more away from individual accomplishments.

“While the games themselves are more individually focused, I feel like we have always had a lot of camaraderie and are now winning as a team,” Vazzalwar said.