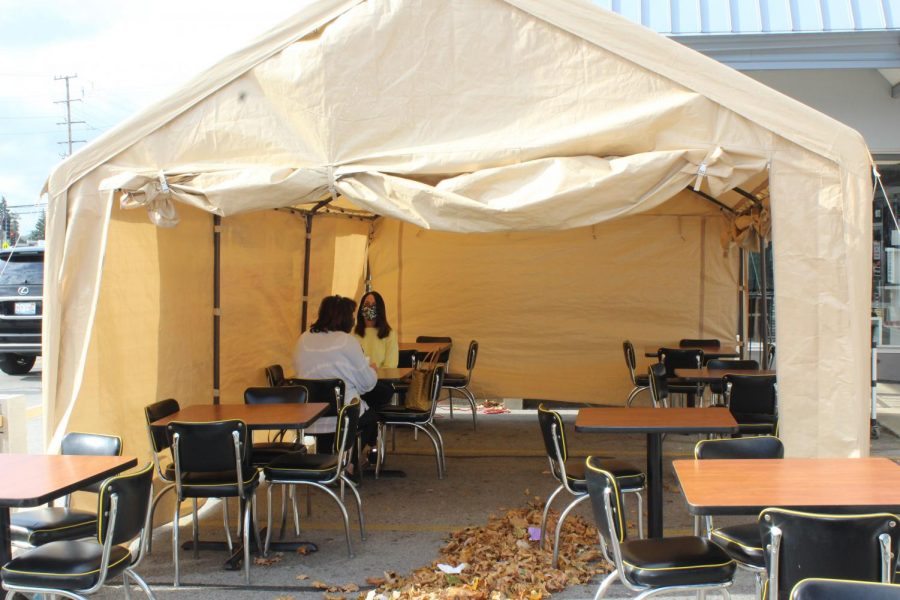 Two customers dine in a tent in the parking lot outside Once Upon a Grill. Once Upon a Grill installed a tent to continue providing a dine-in option for costumers while the weather gets colder. Photo by Brooke Falk

After hearing about Gov. J.B. Pritzker’s stay-at-home order last March, Steve Geffen, owner of Once Upon a Grill, was anxious about the uncertainty of the virus and the impacts it would have on his business.

“My second reaction was, ‘How am I going to make our restaurant safe?’” said Geffen in a phone interview. “[I was worried about] where we [were] able to have customers in the restaurants, outside, or doing carry-outs, and how [I was] going to keep the customers and employees safe.”

In order to provide an outdoor eating option, Geffen said he decided to install a tent in the parking lot of his restaurant. He intends to purchase five or six heaters to prepare for the colder months.

Senior Dylan Yoss said in a phone interview that he spends some of his lunch breaks eating at Once Upon a Grill. He said he felt very comfortable when dining in the tent.

“I thought [the tent] was a really good option because you have to make do with what you have, and I think in this case … a tent is about as good as it gets,” Yoss said.

According to Geffen, the entire consumer model of Once Upon a Grill had to be reversed due to the decrease of dine-in customers. The customer base was originally made up of 90 percent dine-in, and now is 20 percent dine-in and 80 percent carry-out, he said.

Grill House publicist Marcy Manning said in a phone interview that the Grill House staff is working hard to serve customers while taking the appropriate precautions required by the governor’s executive orders. Grill House currently has an outdoor seating area surrounded by heaters, but the staff expects a significantly decreased outdoor presence and they are preparing for an increase in demand for carry-out.

“Curbside [service] is ongoing, and it’s ready and easy for people,” said Manning. “We’ve got a new website that’s coming out [and] our new menu will make it easier for [people] to do pickups [at curbside.] We’re going to make it a little more streamlined.”

Pritzker issued an executive order with public restrictions on restaurants and bars in various regions around Illinois including Cook, McHenry and Lake counties, which prohibits the indoor dining option, on Oct. 29.

According to Geffen, “People were just starting to come back in and dine in, so you know, to start over again after this second time, it’s gonna be difficult.”

The biggest problems for his restaurant are going to come in the next months as the weather gets colder, so the restaurant will not only rely on the carry-out model but also offer their food on DoorDash, an app which allows customers to order off their phones and get delivery to their homes, Geffen said.

“You can’t take your foot off the gas pedal because everyone else is in the same boat, so everyone’s going to be out there doing the same things you are, just trying to do everything they can to keep their customer base,” Geffen said.