The roots of Big Fred

Digging through the rich history of six-year greenhouse resident 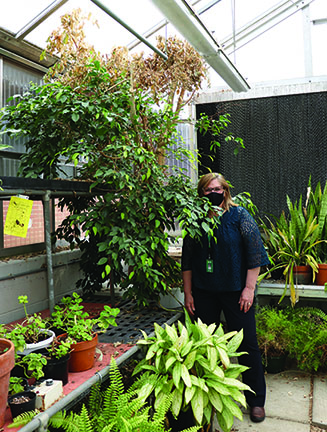 Science teacher Maureen McDonaugh poses with Big Fred in the greenhouse. Fred is one of two Ficus benjamina trees at GBN. Photo by Alex Garibashvily

Nestled in the northeastern corner of the greenhouse stands third-time senior Big Fred. Fred was not assigned a guidance counselor, has never taken a test and has an astounding 0.0 GPA. Although his transcript may not get him into an Ivy League university, Fred is not just any student — Fred is a Ficus benjamina, or weeping fig.

Fred’s story with Glenbrook North began in 2015 when science teacher Maureen McDonaugh received him as a gift from a former staff member.

“He actually was a plant at a teacher’s mom’s house,” said McDonaugh in an in-person interview. “[The teacher] just asked if I wanted it, and I never toss away plants, so I said sure.”

Fred has since grown from being a 1-foot-tall freshman to touching the roof of the greenhouse. Although it’s clear that he has gotten taller, parts of Fred’s roots remain a mystery.

“I don’t know where ‘Big Fred’ came from, I don’t know who named him Big Fred,” said McDonaugh.“I’d have kids name their plants regularly, so my guess is a class that was meeting in [the greenhouse] maybe just named [Big Fred] on its own.”

In his free time, Fred provides shade for other plants around him and converses with his brother Harry, another Ficus benjamina, who has been a greenhouse resident even longer than Fred. Students taking Plant Science give Fred annual “haircuts” by trimming back his leaves to prevent overgrowth and keep him looking sharp.

Senior Drake Marquez, who is currently taking Plant Science, said in a video conference that Big Fred is his favorite part of the greenhouse, grabbing his attention right when he walks in.

Last March, when students stayed home due to the pandemic, Fred was left neglected in the greenhouse. He may not have caught COVID-19, but Big Fred was certainly met with its consequences. While students usually help spruce up the greenhouse at the beginning of the year, that was not the case after the pandemic hit.

According to McDonaugh, COVID-19 left a mark on the greenhouse last spring.

“All the plants suffered a little bit because we weren’t allowed in school during that time,” McDonaugh said.

Big Fred’s health concerns stretch far beyond the pandemic, as a slew of carpenter ants carved their way into Fred’s trunk on one occasion. Other plants in the greenhouse such as Venus flytraps helped gradually  eliminate some of these risks and maintain Big Fred’s health.

Throughout his 6-year-long stint at GBN, Big Fred has stood strong in his corner of the greenhouse. Surrounded by his family, Fred is a friend to students and plants alike.