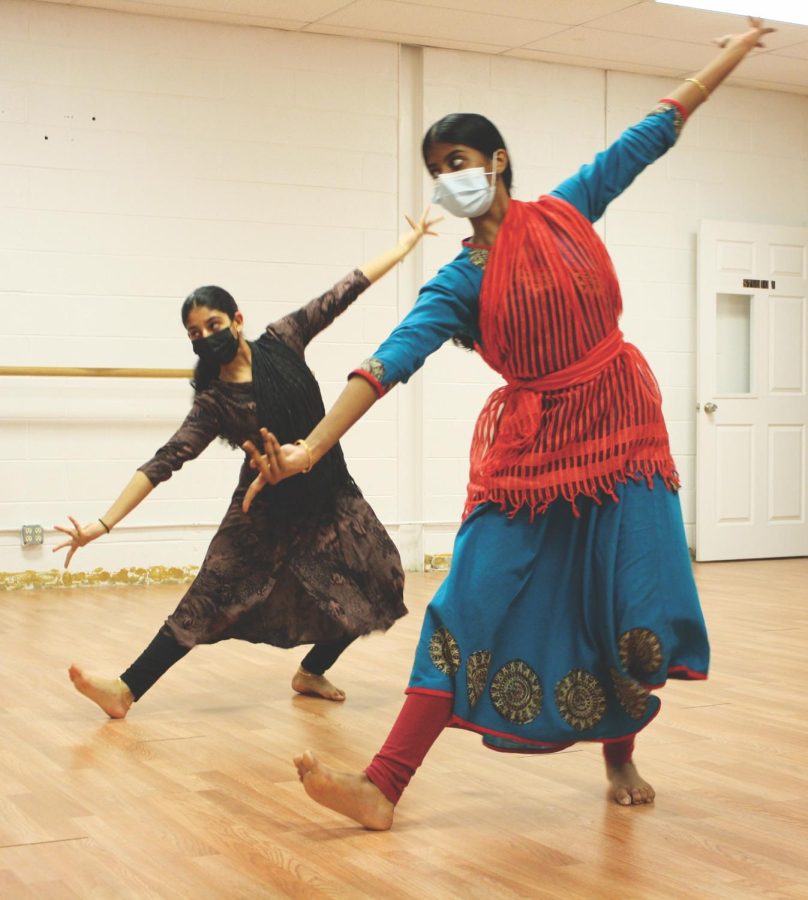 In a duet practice, freshman Emma Kattookaran (left) practices Bollywood dancing. Kattookaran, a member of Nazaare North, was practicing for her upcoming performance at Soorya Dance, an Indian dance and music school.

“Our audience [is] people who don’t know [the culture], so we thought it would be kind of eye-catching for them if they were able to hear the songs that they also know,” senior Ashley Poothurail, one of the group’s four captains, said.

The group’s captains, who have been practicing Bollywood dance since preschool, lead Nazaare North. The captains are in charge of leading practices and choreographing the performances. The group has grown from six to 10 members in the past three years.

As the group has continued to grow, the captains decided to hold auditions for the first time for the 2021-2022 season, Ashley Poothurail said.

“It was difficult because we’re really big on being inclusive,” said Ashley Poothurail.  “So, cutting people out was a really hard decision to make, but in the end, we kept it professional.”

According to senior Anjaly Poothurail, who is one of Nazaare North’s captains, the group resembles a Bollywood dance group.

The group practices Bhangra dancing, which is a type of dance that originates from Northern India, Anjaly Poothurail said.

The group practices without an adult coach, so all dances performed by the group are self-choreographed, Anjaly Poothurail said.

While choreographing for the Nazaare North number in the 2022 Variety Show, Emerge, it was difficult for Anjaly Poothurail to find a variation of steps to include in one section of the routine, she said.

“It was a lot of repeating, so I kind of struggled trying to make the steps look a little more different,” Anjaly Poothurail said.

The group attended a Wednesday practice every week from mid-November leading up to the 2022 Variety Show. Each captain choreographed a section of the dance and then taught the sections to the other group members in a captain’s basement.

The group occasionally performs at family functions and Indo-Pak Night, a Bollywood dance show hosted at Niles West or Niles North, depending on the year.

When performing in front of her peers, Ashley Poothurail initially feared boring them or being labeled as different.

The positive response she has seen from the community has boosted her confidence, Ashley Poothurail said.

“I feel like there is unfortunately a lack of cultural representation in GBN,” said Ashley Poothurail. “That’s why I feel like we keep [performing] every year, because it’s important.”