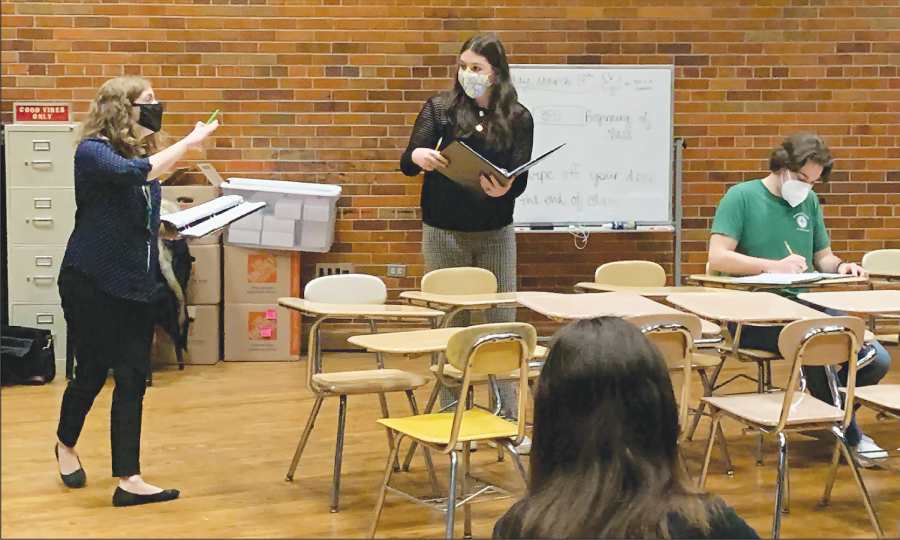 During a rehearsal on March 17, sophomore Leah Popovskiy and choir teacher Kelsey Nichols work on blocking for the part of Alice Beineke. “The Addams Family” was selected as this year’s Glenbrook musical in part because it had a new quarantine edition with a script adapted to COVID-19 regulations. Photo by Alyssa Sanchez

Before recording her audition video for the part of devoted housewife Alice Beineke in “The Addams Family,” sophomore Leah Popovskiy changed into a black and white striped shirt, set up a ring light in her basement and placed her computer beside her to start the music.

“For the vocal auditions, it’s just hard to hear yourself over and over since you want to retake the video as many times as you want given that opportunity, so it was a little stressful to find the best video,” Popovskiy said in a video conference.

Director Claire Drews said in a video conference that one of the reasons for selecting “The Addams Family” was because the musical had a separate quarantine edition with an adapted script. The new edition takes into account that the actors are not able to physically touch and must wear masks, though the plot itself does not take place in a pandemic. The musical runs an hour and a half with no intermission as opposed to the full two and a half hours.

Most of the scenes are set in the Addams family’s mansion, which Drews said allows for more creativity around one set, such as utilizing projections on the back wall of the stage to create the various rooms within the mansion.

Glenbrook South sophomore Maddie Cloutier, a stage crew member for this musical, said in a video conference that the first step of the production process is constructing the set, which takes months to build. During the weeks before technical rehearsals, stage crew works after school until 6:30 p.m. to build the set and sometimes until 8:30 p.m. on Fridays.

After laying a foundation of platforms on the set, stage crew members focus their attention on the wood detailing and adding color with paint, Cloutier said. Once the set is built and rehearsals begin on stage, some crew members control spotlights or the lightboard for light cues, while others remain backstage to hand out microphones and check the sound.

“We have a soundboard that is in the back of the house and that controls all of the microphones and mic packs that we have,” said Cloutier. “Acts where people are talking to each other make it harder to work on the soundboard because you have to mix different [sound] levels and make sure that no one person’s voice is overpowering the others.”

Orchestra director Aaron Kaplan said in a video conference that pit orchestra is given three weeks to learn, rehearse and record all the song tracks, which can be a challenge.

“We have been able to accomplish this huge goal of learning music with a lot of different key signatures and time signatures, more so than in a typical piece of music,” said Kaplan. “There are a lot of both musical as well as technical challenges when you’re putting a show together with a lot of music in a short amount of time.”

According to Popovskiy, the production process is very fast paced because there is a limited time frame to learn everything.

“Every single time we do a scene, we would have to be memorized by the next time we go over it,” Popovskiy said.

Seeing the various aspects of the production process come together and performing in a big auditorium will be a rewarding experience, despite it being a no-contact show, Popovskiy said.