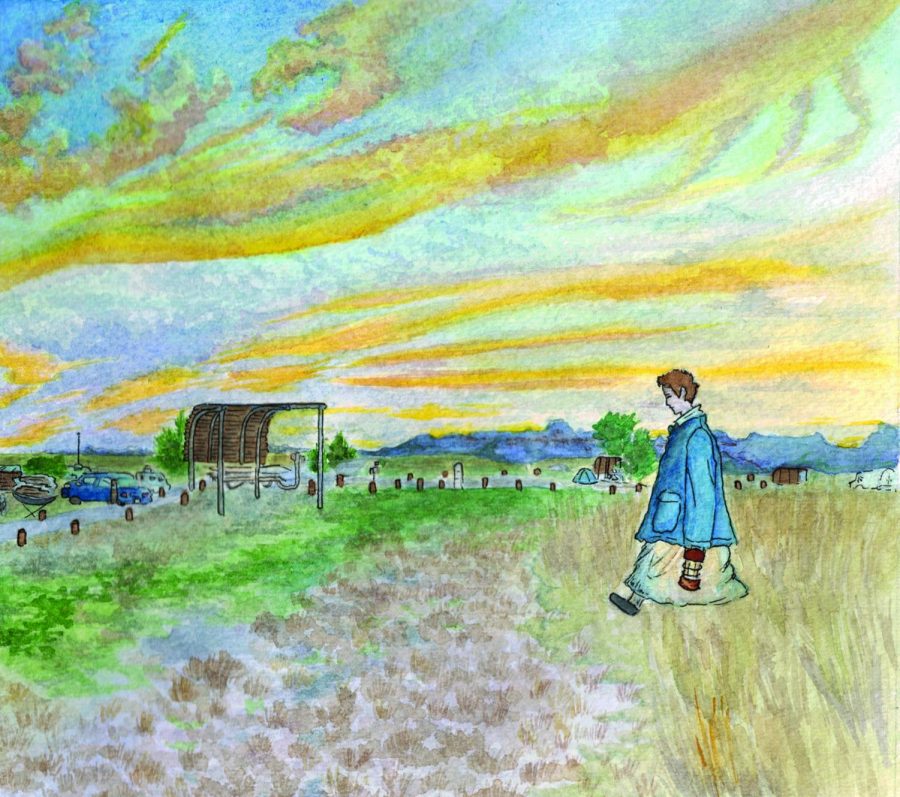 In an illustration of a scene from “Nomadland,” the main character, Fern, walks across a campground at sunset. The movie won two Golden Globes and was nominated for several Oscar categories. Graphic by Baeyoung Yoo

Losing a job and becoming homeless overnight is an immense struggle, but another arises in considering what comes after — how to live without a place to settle. This predicament is what middle-aged woman Fern, protagonist of writer-director Chloé Zhao’s “Nomadland,” is forced to confront after being abruptly laid off. Fern, played by actress Frances McDormand, had worked at Empire, Nevada’s gypsum mine, with her late husband before its closing in 2011, leading to the industry-based town’s economic failure and abandonment by its unemployed residents. She, too, now finds herself among them.

After briefly taking a job at an Amazon warehouse for the winter, Fern sells her belongings to purchase a van and travel across the country, looking for available temporary job openings. With that, her journey through the American West begins, where she befriends fellow nomads living outside of the capitalist system.

Based on the nonfiction novel of the same name by author Jessica Bruder, “Nomadland” is one of the most atmospheric, meditative films of the past few years. It’s also one of the most widely acclaimed, having received six Oscar nominations this year, including for Best Picture, Best Director and Best Leading Actress — and for good reason. The film never devolves into formulaic melodrama or meandering boredom, portraying Fern’s sprawling trek with immense authenticity. Her newfound nomadic lifestyle is tinged with moments of profound beauty, while the harsh difficulties that come with it are portrayed in equal measure.

Fern’s friendships with various nomads — many of whom are van dwellers in real life — provide surprisingly insightful looks into the communal lives of nomad communities. They also reveal the nomads’ personal stories about how they embraced the nomadic lifestyle, even after being forced into it for reasons similar to Fern’s. In some scenes, Fern traverses through several national parks, where the captivating scenery is elevated by cinematographer Joshua James Richards’ sweeping and vibrant camerawork.

At the same time, the film emphasizes that the nomadic lifestyle can be ruthlessly tough. In one scene, Fern finds herself stranded on the road due to a flat tire, and in others, she encounters several nomads who are rejected from establishments such as hotels or hospitals. Through this nuanced emotional honesty, Zhao — with the help of McDormand’s brilliant portrayal of Fern as a receptive, troubled yet silently determined woman — successfully evokes empathy by sensitively illuminating this underground facet of American culture.

“Nomadland” deftly navigates the frustrations and difficulties of being dissociated from the capitalist system, as well as the euphoric, often beautiful freedoms that emerge from it. The film never glorifies Fern’s nomadic life or perverts it into bleak misery, which deepens the movie’s subtle, complex anti-capitalist message. With its depictions of unemployment, recession and other economic defects that have recently been amplified by the pandemic, “Nomadland” displays a powerful, perceptive sense of societal relevance.

Films that possess as much skill and importance as “Nomadland” rarely go unnoticed by awards show panels, proven especially true by this year’s Oscars. After winning top honors at other prestigious events including the Golden Globes and the Venice Film Festival, “Nomadland” has finally reached the pinnacle of the awards race. It currently has a considerably strong chance of winning Best Picture.

“Nomadland” succeeds where some of its fellow nominees fall short by authentically presenting its subject material while making excellent use of film as a medium. It’s not only the film most likely to take home Best Picture but is also one of the rare movies that truly deserves the distinction.