Behind the scenes of Express 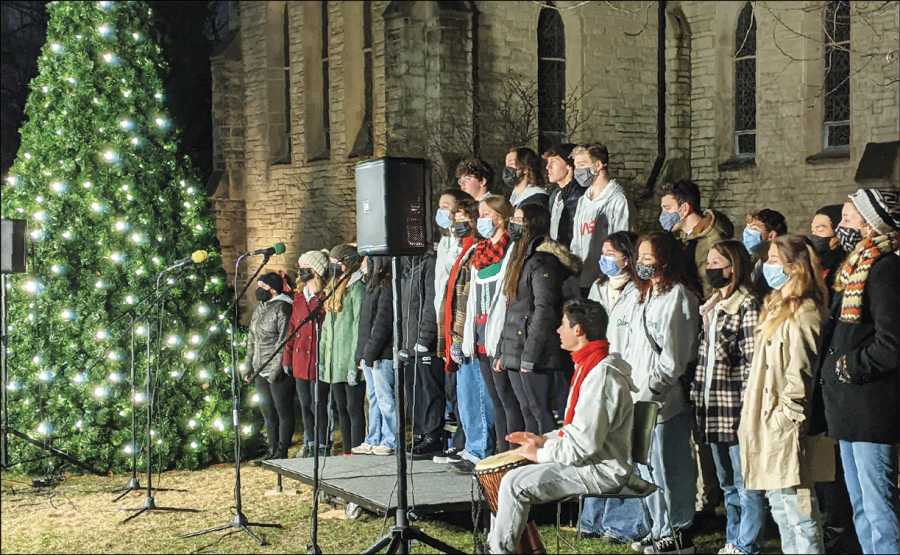 Express, Glenbrook North’s male-female a cappella group, performs for the Village Presbyterian Church’s tree lighting ceremony on Nov. 27. The group has 14 scheduled performances throughout the holiday season for Expressmas, featuring songs such as “Fruitcake” and various Christmas carols. Photo by Jiya Sheth

In drizzling, 39-degree weather, Express, an a cappella group of 22 singers, joined together in front of spotlights and four microphones at the Christmas Walk for The Village Church of Northbrook. This performance on Nov. 27 was the first of the Expressmas season, a period of time in November and December during which Express performs and practices holiday songs.

“It was a little nerve-wracking because it’s my first performance back, and I had to conduct songs, but it ended up going really well,” senior Abby Rench said.

During Expressmas, members are required to memorize one to three songs every rehearsal and must have the songs performance-ready for the next day. All of the memorized songs add up to approximately 90 minutes of performance music.

“One of the last songs we do is ‘’Twas,’ and it’s 25 pages long, and it gets a little confusing,” said Rench. “It’s basically a musical retelling of the poem ‘Twas the Night Before Christmas’ and also has choreography.”

According to senior Jane Heywood, in the Express performance of the song “’Twas,” the smallest member of the group goes to the front and appears to perform a solo, but in reality they are lip syncing. The actual singer, typically a male with a deep voice, sings from the back. This makes it seem like the smallest person is singing with a deep voice, creating a humorous aspect to the song.

Express has an annual winter tradition of taking the train to downtown Chicago and caroling throughout the city. The members plan and execute this trip without their directors. On this year’s trip, their caroling locations included Macy’s, Union Station, and the Christkindlmarket.

On the train to Chicago, Express sings to train riders, taking song requests on their way to the city.

While walking through Millennium Park, Express members stopped underneath the Bean and sang their holiday songs to hear the different echoes and harmonies under the structure. Even though the performance under the Bean had not been a scheduled, a crowd gathered to view their impromptu show.

“We were all standing in a circle singing and then suddenly there’s like 40 or 50 people outside of us with their phones out, cheering and getting super excited for us when we would finish a song and would request a new one,” Heywood said.