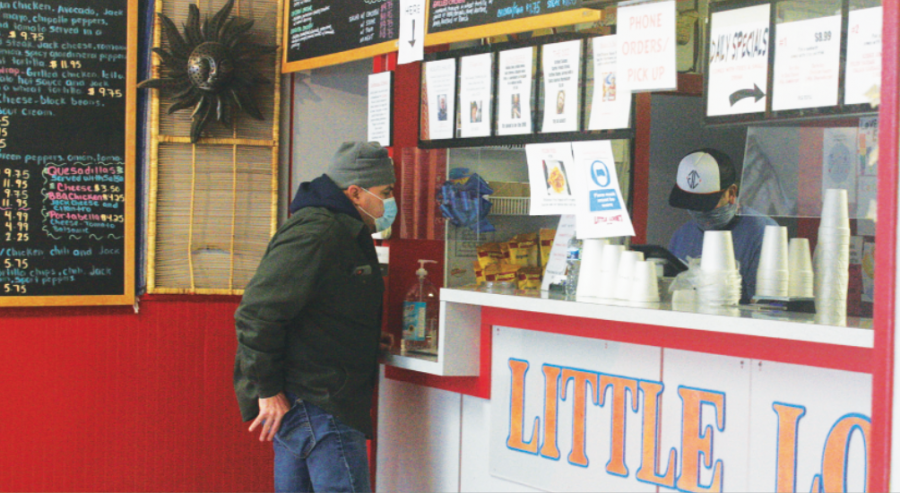 A customer gives his order to Pete Weiss, owner of Little Louie’s. The Barstool Fund recently selected Little Louie’s as a recipient of financial aid. Photo by Brady Rassin

While driving one night, Pete Weiss, owner of Northbrook restaurant Little Louie’s, received an unexpected FaceTime call from an unknown number. Answering the call, Weiss was shocked when Dave Portnoy, owner of Barstool Sports and creator of the Barstool Fund, popped up on the screen. After answering, Weiss quickly pulled over to a nearby parking lot and Portnoy informed him that the Barstool Fund chose Little Louie’s as its next small business to financially support. The Barstool Fund gave the restaurant $25,000.

“[I was] completely shocked,” said Weiss in a phone interview. “One, I’m driving. Two, you’re talking to David Portnoy. Three, you know he’s recording it. And four you’re talking about a lot of emotional stuff.”

According to the Barstool Fund’s website, the Barstool Fund is a nonprofit fund that provides forgivable loans, which are loans that are not required to be paid back. These forgivable loans are intended to provide immediate financial assistance to small businesses in order to help them meet payroll, preserve health care coverage for employees and save jobs.

Barstool Sports did not respond to repeated requests to be interviewed for this article.

According to Weiss, one reason he has retained his employees, despite slower business, is because he views them as his family.

“We’re always there for each other, and we take care of each other,” Weiss said.

Little Louie’s was drastically impacted by the pandemic, Weiss said.

“We were limited to just carryout,” said Weiss. “We have so many other things that we do here: catering, school lunch, camp lunch, the food truck. It all just came to a screeching halt.”

The money from the fund will go toward rent and payroll, Weiss said.

Junior Ben Weiss, no relation to Pete Weiss, a longtime customer of Little Louie’s, said in a phone interview that he was both surprised and excited when he heard the Barstool Fund was providing financial aid for Little Louie’s.

From the old Northbrook news articles covering the walls of the restaurant, to the friendly workers and its location in the center of downtown Northbrook, Ben Weiss views Little Louie’s as a great representation of Northbrook, he said.

According to Pete Weiss, Little Louie’s is very appreciative of the Northbrook community and support.

“We’re just really grateful and thankful that Little Louie’s is a part of growing up in Northbrook.

“I think everybody has a story, and everybody has hardships,” said Pete Weiss. “I don’t know why [Little Louie’s was chosen for financial aid], but we’re just really grateful that we got it.”