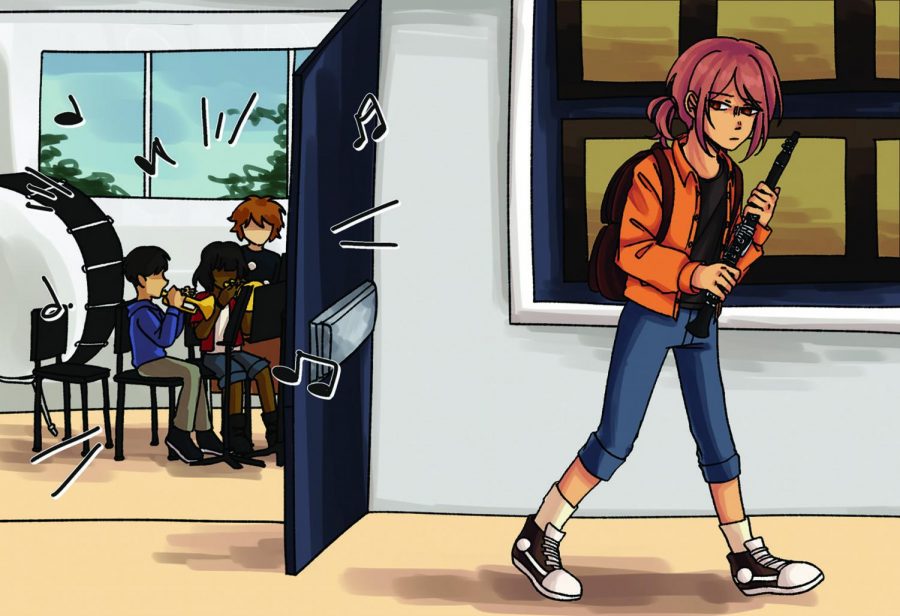 Students who are not enrolled in a music class are not allowed to participate in the majority of extracurricular music groups. Students should be allowed to audition regardless of their enrollment status in music classes to further pursue their musical passions. Graphic by Alyssa Sanchez

After playing clarinet in band since fourth grade and practicing for countless hours over the years, I had to make the difficult decision to take band out of my senior year schedule due to last-minute scheduling conflicts.

Given my past three years of commitment to band, I went to my band director hoping to still have a chance to be part of the Variety Show pit orchestra, an activity I was passionate about. Instead, I was told I could not participate because I was not enrolled in a curricular band class.

However, I view the entire purpose of an extracurricular activity as an opportunity for students to pursue an interest they may not engage in during the school day or would like to further explore beyond the school day.

Most extracurricular music groups that require enrollment in a music class, including the show choir Spartan Sound, a cappella groups, and Jazz Ensemble, already require auditions, ensuring that students have necessary skills to participate. This eliminates students who lack musical background from participating but still gives a chance for students not in music classes to join.

Automatically preventing all students who are not in music classes from auditioning for extracurricular music groups restrains students from pursuing their musical interests outside of the school day.