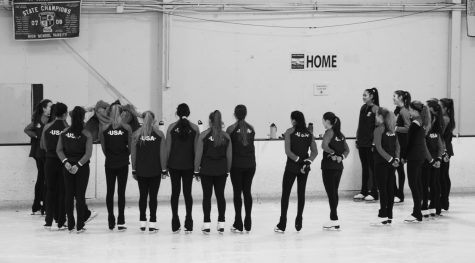 Teams Elite gathers at the beginning of its practice on March 17. The team traveled to a competition in Italy where they claimed first place at their first ever international competition. Photo by Megan Fahrney

Since she began her skating career 11 years ago, senior Caroline Clesen has dreamt of skating for Team USA. Dreams turned to reality when Clesen boarded a plane to Milan, Italy with her teammates to compete at the Spring Cup, the team’s first international competition. Clesen’s team, Teams Elite, made history as the only first-year team to be chosen to be a part of Team USA.

This was the first time Teams Elite had a team at the Junior level, and they were the only U.S. team to win an international title this year. Teams Elite took first place in both the short and long program categories with scores of 67.56 and 93.29 respectively at the Spring Cup.

“I dreamt of it happening, but I never thought it would come true,” Clesen said.

According to Clesen, the preparation for the Spring Cup was more intense than for domestic competitions. The girls spent six “draining” hours practicing at two different rinks every Saturday leading up to the competition.

Sophomore Ellie Lim said the Spring Cup competition was very similar to domestic competitions, as the team did not interact with other international teams at the competition.

When the time came to step onto the ice and perform the team’s program, all she felt was pride.

“When I heard those words come out of the announcer’s mouth, ‘Representing the United States of America,’ that was the moment that I knew this was actually happening,” Lim said.

According to Lim, the short program is more technical with a greater focus on elements such as synchronized spins and step sequences. Teams Elite’s short program was set to the song “Survivor” by Destiny’s Child.

“It’s dark, not scary, but it’s deep because you really get into character,” Lim said.

The long program was inspired by the story of Romeo and Juliet. According to Lim,  long programs are more artistic and graceful. The long program focuses on the transitions between elements in addition to the elements themselves.

“It’s almost more based on how you interpret the story [with] your emotions, body movements and how you’re going to take the story and write it for the audience in your own words,” Lim said.

Outside of the competition, the team had the opportunity to sightsee around Milan. They visited the Duomo, went shopping and visited Verona, the setting of Romeo and Juliet. Lim said that as they traveled through Milan and Verona, many people they met were very welcoming.

“We went to an all-you-can-eat pizza place [where] they pretty much stopped everything that was going on and started celebrating us,” said Lim. “They had, like, music playing, we were dancing, having the best time of our lives.”

Clesen said she credits the strong bond her team shares as one of the factors that has helped to propel them to success.

“We really get each other,” said Lim. “They’re truly the people who molded me into the way I am today.”