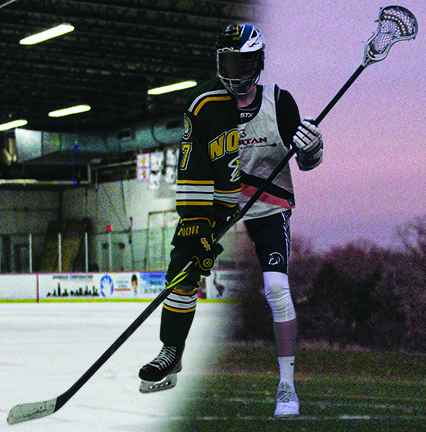 When sophomore Sarah Denk started playing basketball after having played soccer for several years, she noticed many of her soccer skills including speed and mental perseverance helped her on the court. But when her club soccer and high school basketball seasons overlapped, she experienced the effects of exhaustion.
A benefit of practicing multiple sports is the reduction of overuse injuries, Dr. Karla Steingraber, sports psychologist at Everest Strong Coaching, said in a phone interview.
“Switching things up helps with overuse injuries and also makes you develop other muscles and other movements so that you’re not just overdoing it in one area,” Steingraber said.
Athletes who participate in one sport generally work the same muscles and do not get as many counter-exercises to balance out the strain, Steingraber said.
Physical therapist Zach Meyer said in a phone interview that an example of an athlete who potentially avoids an overuse injury by participating in multiple sports is a baseball pitcher who also runs cross country. The shoulder is under constant stress during the baseball season, but once the athlete starts running and takes stress off the shoulder, the athlete is at a decreased risk of an overuse injury.
Another benefit of being a multi-sport athlete is that cross-training across different sports improves athletic performance in each sport.
Multi-sport athletes tend to be more in tune with their bodies, making it easier for them to compete in multiple sports, Matt Fastert, head sprint coach for girls track and field, said.
“In track, it’s a lot of explosiveness,” said Fastert. “As soon as I have a sprinter that was a gymnast or a cheerleader, they are immediately so good at accelerating.”
Multi-sport athletes’ skills may transfer between sports.
Senior Kyle Burke started playing hockey from a young age, so when he started playing lacrosse in elementary school his stickhandling skills transferred over quickly.
“The other thing is hockey teams can be physical,” said Burke. “So I was a pretty physical lacrosse player from a young age.”
According to Steingraber, a detrimental effect of being a multi-sport athlete is exhaustion or burnout.
In the winter season, Denk goes straight from basketball to soccer practice, allowing her to work on her mental perseverance but also leaving her drained when she gets home.
Playing multiple sports for several hours a day can get taxing, and it may get difficult for athletes to put all their energy into competitions, Steingraber said.
“If we are talking about mental exhaustion, sleep deprivation or muscle fatigue, we are not at our best,” said Steingraber. “We are more prone to mistakes in judgement and physical injury, learning is impaired and perhaps worst of all, it’s not that enjoyable.”
According to Meyer, whether one is a multi-sport athlete or a single-sport athlete, the body will need rest.
“It all boils down to giving your body that time for rest,” said Meyer. “Physical exhaustion and burnout, that’s going to come from not giving your body that rest time.”